Investigation on the resistance of 25 olive genotypes to Aceria oleae and Oxycenus niloticus (Acari: Eriophyidae) under greenhouse condition

Mite species of the family of Eriophyidae (Acari: Prostigmata) are the most harmful mites of olive in most olive–growing countries. In this study, two species, Aceria oleae (Napepa) and Oxycenus niloticus Zaher & Abou–Awad, of this family were collected and identified from Tarom, north of Zanjan province during 1998 to 1999. These mites are serious pests, especially in the greenhouses of olive propagation. A.oleae usually live on the underside of terminal olive leaves where it inserts itself under the star shape hairs and causes them to drop off and to make yellow leaf spots and various forms of leaf deformation or defoliation. O.niloticus is normally found on upper surface of terminal olive leaves and produces some leaf pitting and deformation. In early October, under natural conditions, these mites refer to be on suckers which were the most important sites of feeding for them. In this study, twenty-five genotypes of olive (most from Hashemabad orchard, Gorgan, north of Iran) were evaluated in relation to their resistance to these species at completely randomized design. The evaluation was carried out in the greenhouse and infestation rate of treatments was recorded based on leaf damage index (reaction of leaf to mite feeding × percentage of leaf area infestation). Based on the greenhouse scoring, six categories were designated: F6 genotype with relatively immune response, E1, M4, J4, J11, 30-Ilam kolafaraj and 61-shengeh Gorgan with highly resistance response, D8, B8 and sevilana with resistance response, F10, E11, H7, I6 and A12 with moderately resistance response, D2, F7, C12, G8, C5, F2 and Roghani with susceptible and D12, E2 and Zard with highly susceptible response. Considering the high density of eriophyid mites in propagation greenhouses and possible of their transfer to pest appropriate areas (such as Gilan and Golestan provinces), application of above resistant genotypes or use of them to produce resistant cultivars are recommended. 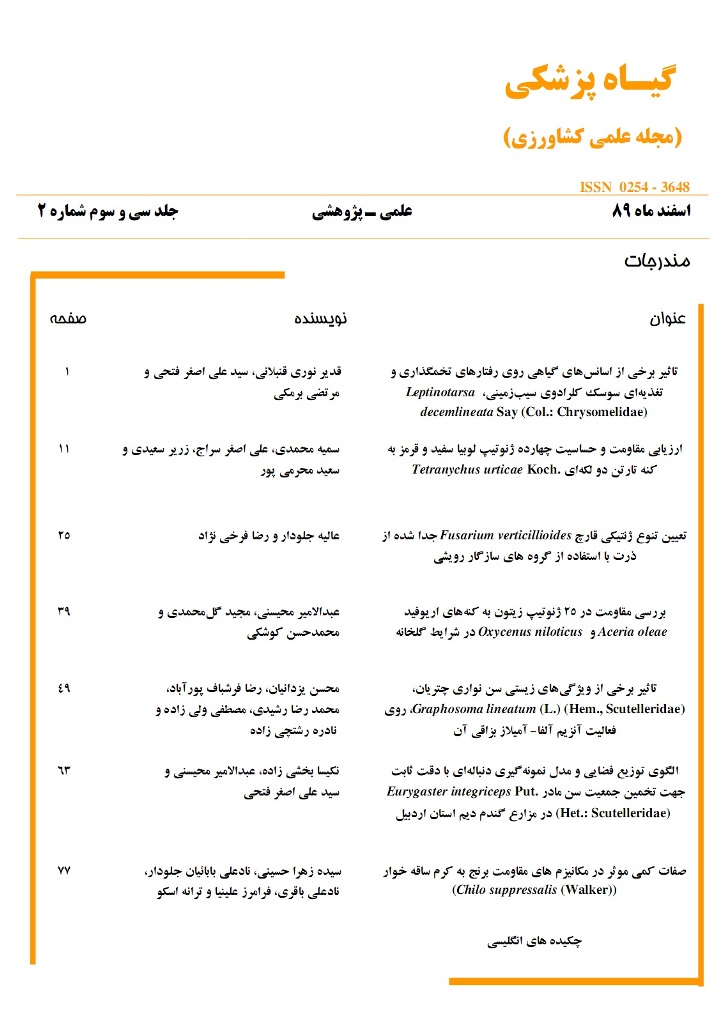